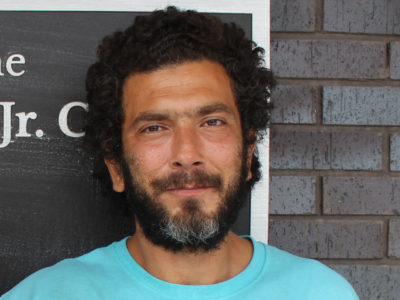 Omar* was born in Saudi Arabia, lived in Dubai as a teenager, and moved to the U.S. after getting married in 2012.  He and his wife were excited about starting a new life in the U.S., free of the constant fear of war in the Middle East.  His parents had fled to their native Turkey during the Syria War and his brother became a refugee in Germany.

At first, Omar and his wife were happy in their new country.  He speaks proudly of his experience working for engineering firms in Sterling and Alexandria, Virginia.  “I had studied engineering for two years while I was living in Dubai.  I got the equivalent of an Associate’s degree in Engineering.”

But after a few years, Omar and his wife began struggling with depression. Their marriage soon ended and without the support of family, Omar was unable to keep his job and afford his home.  One thing led to another and he ended up living on the streets for four years.

In March 2021, a homeless services provider from the City of Alexandria approached Omar while he was living near City Hall.  She explained that he could live at Carpenter’s Shelter and have a warm, safe place to sleep, plenty of food and necessities, and support from Carpenter’s staff in finding a permanent place to live. “I wasn’t sure what to expect but I decided to give it a try. I am really glad I did!”

Carpenter’s Case Management staff worked closely with Omar to help him achieve his goal of permanent housing.  “Initially, the thing I liked the most, after being homeless for so long, was having a mattress to sleep on.  As time went on, I started to realize once I secured housing, I could go on to pursue my dream of earning my degree in Engineering. I’m now very grateful for the stability and having my own place!”