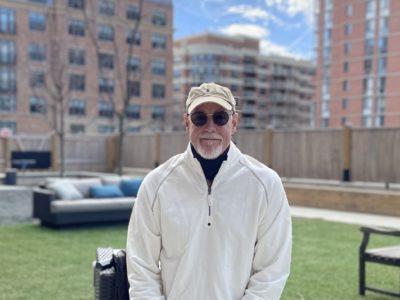 Michael grew up in Washington, D.C., has a college degree including 1½ years at Georgetown, speaks fluent French as well as some Spanish and Arabic, and owned a successful property company in London.  In his 40s, Michael dove into a business venture in the U.K. that did not go well. “I made some bad decisions and cut some corners financially.” He ended up spending time in prison in both the U.S. and the U.K.

Fast forward to December 2021 when Michael was released from the U.K. prison and immediately deported to the U.S. He arrived at Dulles airport with an expired ID, an expired passport, no transportation, no place to live, no friends and family to call on, and no credit. “I couldn’t even get a cell phone because I had no credit.”

Desperate, he contacted an elderly friend of his mother’s who picked him up at the airport in the middle of the night and helped him find a motel to stay in. Michael knew the small sum of money he had earned while working in prison would not last long. He remembered how 20 years prior, he had met an immigrant medical doctor who had fallen on hard times and after providing some assistance, he had guided the man to Carpenter’s Shelter.

Now, 20 years later, Michael contacted Carpenter’s Shelter to see if he could get help too.

Carpenter’s staff helped Michael find the City’s homeless services office where he could go on the waiting list for shelter and helped him obtain an ID which was a key step to everything else. Within a few days, he was able to leave the motel and move into Carpenter’s Shelter.

“Carpenter’s staff was instrumental in helping me get back on my feet. They provided me with the resources I needed so I could work toward my goals. They not only give you a roof over your head, they give you the chance to concentrate on the things you need to do to get out of the shelter and on with your life.

“The facility is incredible. Having internet access and space to work on finding a job and housing was so valuable. I was able to contact a former business colleague who gave me a second chance and hired me as a restaurant manager.” His mother’s friend lent him money to purchase an inexpensive vehicle so he could get to work.

After being turned down at several apartments because of his criminal history, a Carpenter’s Housing Locator helped him secure a shared apartment. After a little over a month at Carpenter’s Shelter, Michael moved into his own housing.

“I am amazed by the generosity of Carpenter’s donors and volunteers – even bringing home-cooked meals and giving their time every day. I can’t think of a more worthwhile place to make a contribution than Carpenter’s Shelter. They make a real difference every day — not just to sustain you, but to make real change in your life.”