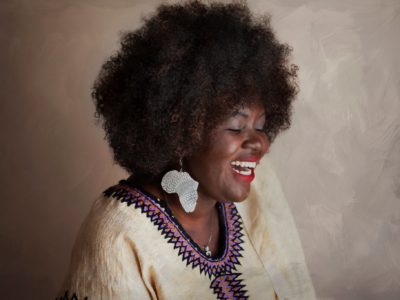 At age 19, shelter graduate and single mother Viviane left her home country, the war-torn Democratic Republic of Congo, and became an asylum seeker in the United States in 2012. However, in 2017, immigration policies changed and delayed her work permit renewal, leading to the loss of her job. Viviane tried to make ends meet by drawing upon her savings but soon, she and her young daughter were facing homelessness.

Once they entered shelter, their outlook quickly improved! In less than two months, Viviane was able to get her daughter enrolled in preschool while the shelter covered the program and transportation fees. Then Viviane’s work permit came through and she found a job. Soon after, she found affordable housing! Thanks to funding from the Virginia Housing Solutions Program, Carpenter’s Shelter could take care of the security deposit and the first two months of rent to ease her transition back into the community.

Next, Viviane applied for and received a Carpenter’s Education Fund scholarship. With the funding, Viviane was able to enroll in a pharmacy program. Finally, a generous donor solved Viviane’s last problem–long commutes and excessive time away from her daughter–by gifting her a car. Now, Viviane and her daughter continue to live in the community. She works full-time at a local pharmacy while preparing for her licensing exam and pursuing other passions like public health and social entrepreneurship.

Congratulations to Viviane for her hard work and determination!

Last Year Carpenter’s Shelter served:
Over 784 homeless and formerly homeless children and adults. During that time, the city of Alexandria VA had an average of 198 homeless people per day, based on it’s annual Point In Time Survey.

Carpenter’s Shelter Success
93% of clients who receive Rapid Re-Housing funding and ongoing supportive services remain in permanent housing during their first vulnerable year in the community.