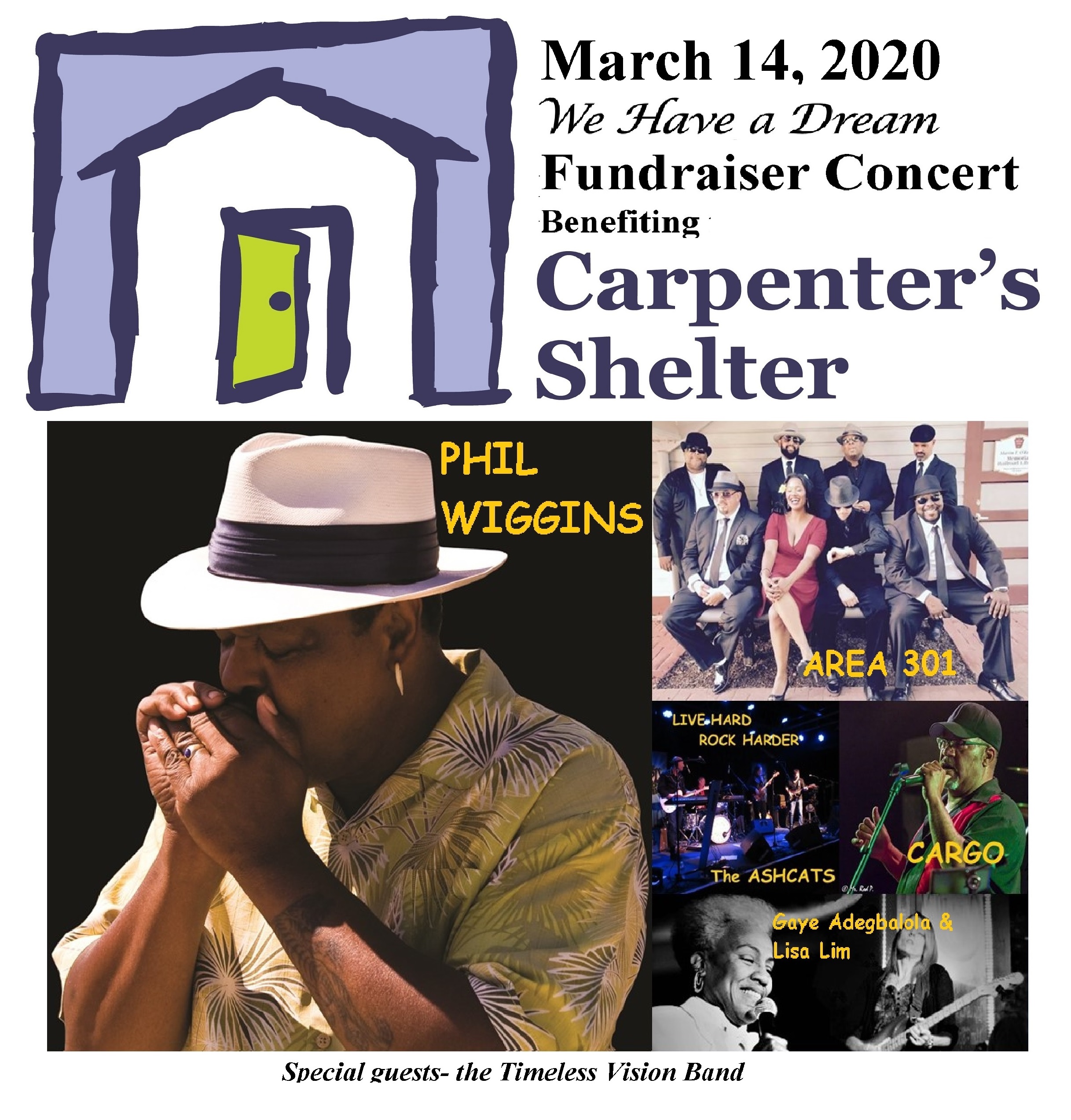 The Carpenter’s Shelter has helped thousands of families and individuals in the City of Alexandria find permanent housing and escape homelessness since 1982. Proceeds from this year’s We Have a Dream Concert will go directly to support the Carpenter Shelter’s mission.

Many of DC’s finest performers have partnered with Concerts Unite Us to produce an evening of music showcasing the DC Metro region’s distinctive styles of Blues, Jazz Fusion, Hip Hop, and Rock & Roll. Concerts Unite Us is a 501(C)3 non-profit that hosts concerts to benefit local equal justice organizations. Our mission is inspired by the Poor People’s Campaign organized by the Southern Christian Leadership Conference and Dr. Martin Luther King.

Washington, D.C. native Phil Wiggins, a Takoma Park, Maryland, resident, blues musician, teacher and artistic director, a two-time winner of the prestigious WC Handy Blues Foundation awards, is only the third harmonica player to receive the lifetime honor of an NEA National Heritage Fellowship. Today he is the only living player of the instrument to hold the prestigious honor of being a “Master of Traditional Arts.” Often referred to by its unofficial designation as “Living Cultural Treasure” award, the fellowship honors and preserves the diverse cultural heritage in the United States. The National Endowment for the Arts (NEA) annually awards one-time-only NEA National Heritage Fellowships to master folk and traditional artists, to recognize lifetime achievement, artistic excellence, and contributions to our nation’s traditional arts heritage.

Cargo and the AshCats features the awe-inspiring presence of Randy McCargo, backed up by accomplish East Coast journeymen. In 2015 OnTap Magazine dubbed Cargo DC’s next rising star. “The powerful and mesmerizing voice of Randy McCargo makes Cargo a must see, as his dynamic voice is a rarity in the modern scope of music. From the sound to their attire, this band is wonderfully old school.” The AshCats have performed continuously since Their longevity is a testament to their passion, creativity, and work ethic. The AshCats focus on Blues and Rock and Roll. AshCat shows are high energy and improvisational. They were a Jam Band before the term came into common usage. The grooves are rock-solid to a degree that only 40 years of playing together can achieve.

Last Year Carpenter’s Shelter served:
Over 624 children and adults who were homeless or formerly homeless. In 2021, there was an average of 106 people per day experiencing homelessness in the city of Alexandria, based on the City’s annual Point In Time Survey.

Carpenter’s Shelter Success
93% of clients who receive Rapid Re-Housing funding and ongoing supportive services remain in permanent housing during their first vulnerable year in the community.


Carpenter’s Shelter is a 4-Star Charity as listed on Charity Navigator.org